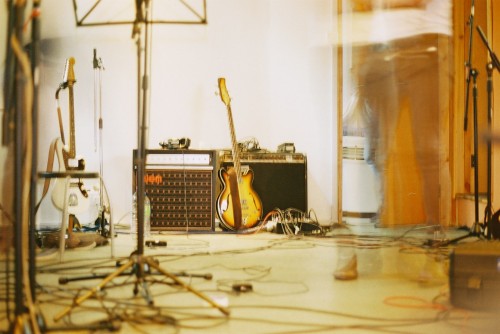 The Exhibition is a Barnsley based progressive-pop band formed in the spring of 2008 and consisting of members: Joel Burrows (Guitar), Pete Dand (Vocals/Guitar), Andrew Murray (Bass) and Lee Padgett (Drums). The band releases ‘Carry to the End’ on the 1st of September, its third EP and sixth release proper.

Shortly after forming, The Exhibition recorded an initial demo with Alan Smyth (Arctic Monkeys, The Long Blondes) before beginning a long standing relationship with producer Dave Sanderson that initially resulted in 2009’s self-titled 4-track EP. Featuring longtime set-opener ‘The Boy and The Tearaway’ (“Executed brilliantly, and sounds natural rather than forced, a swirling maelstrom of shoegaze guitars and truly mammoth drums, propelled by some frenetic fills” 9/10 Whisperin and Hollerin) and anthemic pop song ‘Bright New Worlds’ (“This is one of the best things I’ve heard in a while” Indie-MP3) the EP was critically well received amongst the blogging community. The Exhibition went on to receive airplay from various international radio stations – including regular play from Tom Robinson and Ian Hodgson at the BBC – and garnered support slots with Hatcham Social, The Kabeedies and Roses, Kings, Castles.

In 2010 the band recorded their debut single ‘The Crown/Coma’ for Of National Importance Records. Released as a limited edition 7″ vinyl, the single was brilliantly received, with critics noticing the rate at which the band had progressed (“A quite staggering leap forward. What we are witnessing is a band beginning to fire on all cylinders. God help us all” 8/10 Tasty Fanzine |“Unashamedly progressive, a startling indicator of how far the group have come in such a short while” 8/10 This Is Fake DIY).

After an almost two year long hiatus, the band returned to playing live in 2013 with a slightly altered line-up and released the EP ‘Man Proposes, God Disposes’ (“A step up in terms both production and song writing. The world is waiting for a band as good The Exhibition.” Alternative Barnsley) along with the track ‘Memento Mori’ (“Beautiful in its gentleness” 8/10 There Goes the Fear). Carry to the End marks The Exhibition’s sixth year as a band. The four tracks were again recorded by Dave Sanderson (65 Days Of Static, Hey Sholay) at 2fly Studios in Sheffield and mastered by Tom Woodhead (Hookworms, Post-War Glamour Girls). The track ‘Finis’, recorded at the same sessions, is available to download for free now at http://www.the-exhibition.co.uk

“The Crown is one of those songs that begins quite understated before swelling into something monumental. It’s a huge grower… In short, all the ingredients are there, and The Exhibition deserve to be huge.”
9/10
Whisperin And Hollerin

“What we are witnessing is a band beginning to fire on all cylinders. God help us all.”
8/10
Tasty Fanzine

“Genre-spanning alt.pop…The Exhibition are definitely well worth checking out if you like your guitar bands a little bit quirky and with serious musical talent involved.”
8/10
Sugar The Pill

“Unashamedly progressive, a startling indicator of how far the group have come in such a short while. Its awkward 5/4 time signature fits the track perfectly, the watertight rhythm section driving it”
8/10
This Is Fake DIY

“An amazing four minutes of The Dears-esque vocals bound with all the urgency and prowess of what made Bloc Party’s debut so important. It’s majestic, skywards melodies and has rolling thunder of a Peter Hook-like rhythm.”
8/10
Alternative Barnsley

“A slow burning menace that reeks of moody introspection and dark, brooding intensity… The Exhibition are a band capable of great things and [The Crown/Coma] leaves you eager to hear just where they go next.”
5/5
UK Music Review

“A cracking live band, great on record and a great set of lads to boot, Barnsley’s finest really do have everything going for them at the moment.”
4/5
The Beat Surrender

“So infectious, so well constructed, I’m already beginning to think The Exhibition are worth inking into your 2010 must listen list“
Manchester Music
4/5

“Barnsley Natives ‘the exhibition’ certainly pack a punch that cannot go unnoticed with this entrancing double ‘A’ side Single release”
8.5/10
Glen Reviews

“There is much to be admired on this debut from this Barnsley four-piece. Some nice guitar breaks and powerful drumming add to the sense of impending doom that pervades this excellent double A-sided slice of downbeat prog”
The Musix Fix

“Attitude shines throughout, fantastically embedded within a tease of something tantalisingly darker; fast becoming their noticeable trademark”
Live Music Scene

“Yet again, we are left in no doubt as to its epic aspirations… This single is an absolute gem by any standards”
Sheffield Scenester

“The Exhibition have everything they need and combined with such a memorable single, I won’t be long until they seduce the top play-lists of 2010.”
Jukebox Music

“The echoed reverbing guitars are off-set superbly by the clear low baritone vocals of Pete, which are resonant of Ian Curtis, the whole effect lifted in to a new place by the great inter-play between the guitars.”
Indie Bands Blog

“It’s hopefully downbeat, but redeemingly clever northern grit, that’s the real version, bit of passion here, you see. Both eyes on the instrument, not one on the headline and the other on the dotted line. The Exhibition are a band and they actually sound like one”
Unpeeled

One response to “The Exhibition”